After almost 5 years since it was first released, the AWS Certified Developer Associate exam is finally getting revamped. The AWS Training and Certification team is launching a new version, with an exam code of DVA-C02, on February 28, 2023, making it the last of the three associate-level exams to receive a major overhaul. You can register for the new exam starting on January 31, 2023, or take the current DVA-C01 exam until February 27, 2023.

The AWS Certified Developer Associate DVA-C02 exam maintains some continuity with its predecessor but also introduces a range of new topics, services, and features. One notable change is the eviction of the “Refactoring” and “Monitoring and Troubleshooting” domains, which have been swapped out for the new “Troubleshooting and Optimization”. Based on its description, you’ll see that “Troubleshooting and Optimization” combine and expands upon the areas previously covered in the two removed domains, providing a more comprehensive approach to debugging issues and optimizing application performance.

With the total number of domains now reduced to four, the weighting distribution has been adjusted accordingly as well. Jumping from 30% to 32%, Development with AWS Services is still the crux of the Developer associate exam. Security, which has remained unchanged at 26%, comes in as the second most important topic. Following closely behind is Deployment, which now accounts for 24% of the exam — a 2% increase from its previous weight. Finally, of the four exam domains, the latest “Troubleshooting and Optimization” has the smallest percentage at 18%. 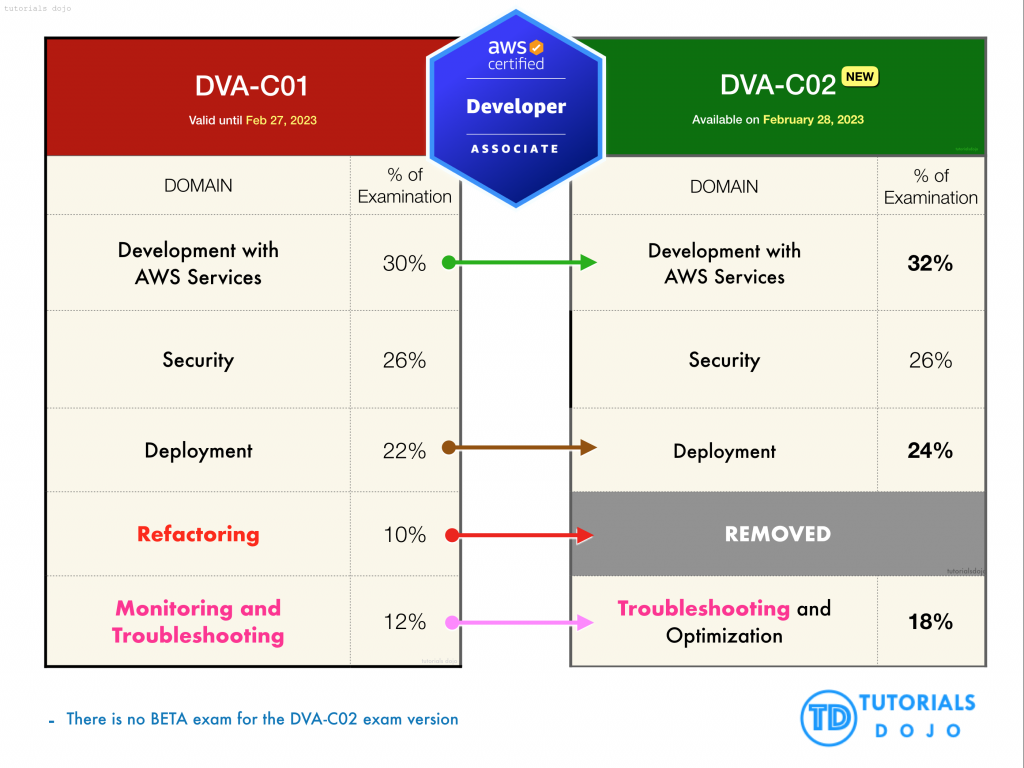 If I pass the DVA-C01 exam before February 27, 2023, will my certification remain active, or do I have to take the new version to keep my credentials?

No. You don’t have to take the new version to renew your DVA-C01 certification. If you pass the DVA-C01 before it’s retired, the certification and digital badge that you earn upon passing the exam remain valid for three years.

What are the topics that are in the scope of the DVA-C02 exam?

The DVA-C02 exam has expanded to include 25 new services in the list of its in-scope AWS services and features. It’s interesting to note that AWS Fault Injection Simulator is no longer a part of the new version, and AWS WAF, which was considered to be out-of-scope before, is now covered. The list below may seem daunting and extensive, but don’t worry, as it’s not necessary to fully understand every aspect of each service. Remember that the exam focuses on candidates who are in development roles. Hence, only features and knowledge areas relevant to a developer will be tested on the exam.

Which AWS services are NOT included in the DVA-C02 exam?

This list is not exhaustive and only serves as a general overview of the AWS services and features that are not covered on the DVA-C02 exam. However, it can give you an idea of the services you do not need to focus on for the AWS Certified Developer — Associate exam.

Final thoughts For the DVA-C02 Exam

One thing that I noticed right away while reviewing the sample questions was that the options were more verbose than before. For example, I didn’t see any questions that had a one-word answer or were composed of short sentences, which was a departure from the previous format.

Also, it appears that candidates are now expected to not only have surface-level knowledge of a solution but also to be comfortable reading and understanding code implementations. For example, knowing the difference between lazy loading and write-through caching simply by definition is not enough. You should also know how to implement and translate them into code. Don’t worry if you are only familiar with one programming language – the exam will likely give pseudocode for you to analyze rather than in a specific programming language.

Ultimately, the DVA-C02 certification should be an opportunity for you to stay up-to-date and elevate your skills in developing on AWS using the latest best practices and services. Doing so can help you stand out in a competitive job market, improve your job prospects, and enhance your credibility as a developer. As you work towards your DVA certification, it’s important to have a solid study plan in place. If you’re looking for additional resources to support your studying, you might want to consider using our review materials:

Carlo is a cloud engineer and a content creator at Tutorials Dojo. He's also a member of the AWS Community builder and holds 5 AWS Certifications. Carlo specializes in building and automating solutions in the Amazon Web Services Cloud.