Amazon Web Services provides the most extensive global footprint compared to any other cloud provider in the market, and it opens up new regions faster than others. In the short video lecture below, we’ll discuss the AWS global infrastructure and briefly talk about availability zones and regions in AWS.

AWS provides the most extensive global footprint compared to any other cloud providers in the market, and it opens up new regions faster than others/. AWS maintains numerous geographic regions around the globe, from North America, South America, Europe, Asia Pacific, and the Middle East. AWS serves over a million active customers in more than 190 countries.

AWS is able to support this massive workload thanks to its Global Cloud Infrastructure, which consists of the following:

The AWS Global Cloud Infrastructure is the most secure, extensive, and reliable cloud platform in the industry today, which offers a wide range of cloud service offerings. AWS is the top choice of small and medium enterprises for deploying their application workloads across the globe and for distributing content closer to their end-users with low latency. It provides you with a highly available and fault-tolerant cloud infrastructure where and when you need it.

AWS owns and operates thousands of servers and networking devices that are running in various data centers scattered around the globe. A data center is a physical facility that houses hundreds of computer systems, network devices, and storage appliances. You can run your applications in two or more data centers to achieve high availability, so if there is an outage in one of the data centers, you still have other servers running in another data center. A data center can also deliver cached content to your global end-users to improve response times.

At its core, the AWS Global Infrastructure utilizes multiple data centers and groups them into Availability Zones, Regions, and Edge Locations. Let’s discuss these components one by one:

An AWS Region consists of multiple Availability Zones. AWS has various regions available in North America, South America, Europe, Asia, and other parts of the globe. Since a single AZ consists of multiple data centers, your system can achieve a higher level of fault-tolerance by running it in two or more AZs. This enables companies to build highly available, fault-tolerant, and scalable cloud architecture instead of running their applications on a single datacenter.

To improve the durability of your data, you can also replicate it to two or more regions. This is helpful for disaster recovery and backups.

The Availability Zones of a single AWS Region are typically within hundreds of kilometers or miles of each other. However, these AZs are still within a specific country to comply with the data sovereignty requirement. This is particularly useful if you have sensitive data that must only be stored in a certain location or country for data privacy compliance.

The other component of the AWS Global Cloud Infrastructure is the edge networks of Point-of-Presence or PoP. It consists of Edge Locations and Regional Edge Caches, which enables you to distribute your content with low-latency (pronounce: Laaay-tancy) to your global users. Basically, a PoP serves as an access point that allows two different networks to communicate with each other.

By using these global edge networks, a user request doesn’t need to travel far back to your origin just to fetch data. The cached contents can quickly be retrieved from regional edge caches that are closer to your end-users. This is also referred to as a Content Delivery Network or CDN.

So for example, you have high-resolution images stored in a server in California. You can cache these media files to an edge location in the Philippines, India, or Singapore to allow your customers in Asia to retrieve these photos faster. The images will be loaded quickly because it is fetched to an edge server near your users, instead of retrieving it from its origin server in California.

As mentioned above, the AWS Global infrastructure is built around Regions and Availability Zones (AZs): 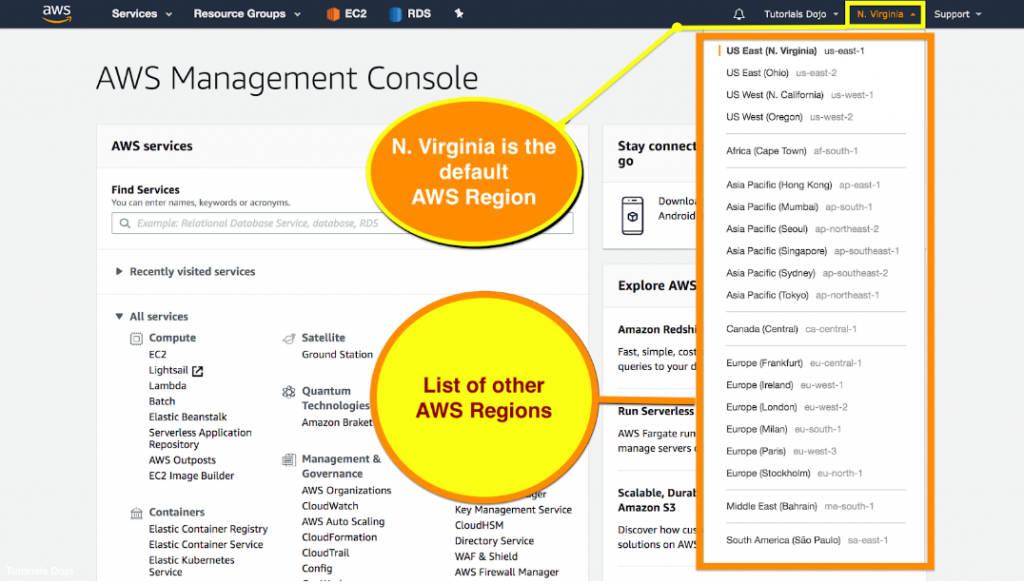 Regions provide multiple, physically separated, and isolated Availability Zones which are connected with low latency, high throughput, and highly redundant networking. Availability Zones offer highly availability, fault tolerance, and scalability. It consists of one or more discrete data centers, each with redundant power, networking, and connectivity, housed in separate facilities. An Availability Zone is represented by a region code followed by a letter identifier; for example, us-east-1a.

You can visualize the hierachy of the Availability Zone and AWS Region in this diagram: 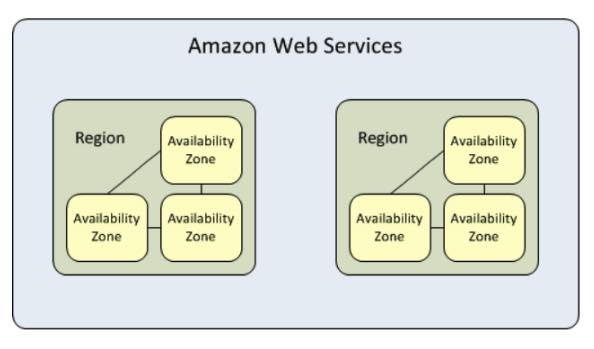 An AWS Local Region is a single datacenter designed to complement an existing AWS Region. An AWS Local Zone places AWS compute, storage, database, and other select services closer to large population, industry, and IT centers where no AWS Region exists today. To deliver low-latency content to users around the globe, AWS has placed Points of Presence, which are either edge locations or edge caches. These points are used by Cloudfront and Lambda@edge services. Edge locations are locations that CloudFront uses to cache copies of your content for faster delivery to users at any location.