Which of the following Amazon EC2 instance purchasing options can help you address compliance requirements and reduce costs by allowing you to use your existing server-bound software licenses?

An Amazon EC2 Dedicated Host is a physical server with EC2 instance capacity fully dedicated to your use. Dedicated Hosts can help you address compliance requirements and reduce costs by allowing you to use your existing server-bound software licenses.

The following table highlights the key similarities and differences in the features available to you when using Dedicated Hosts and Dedicated instances: 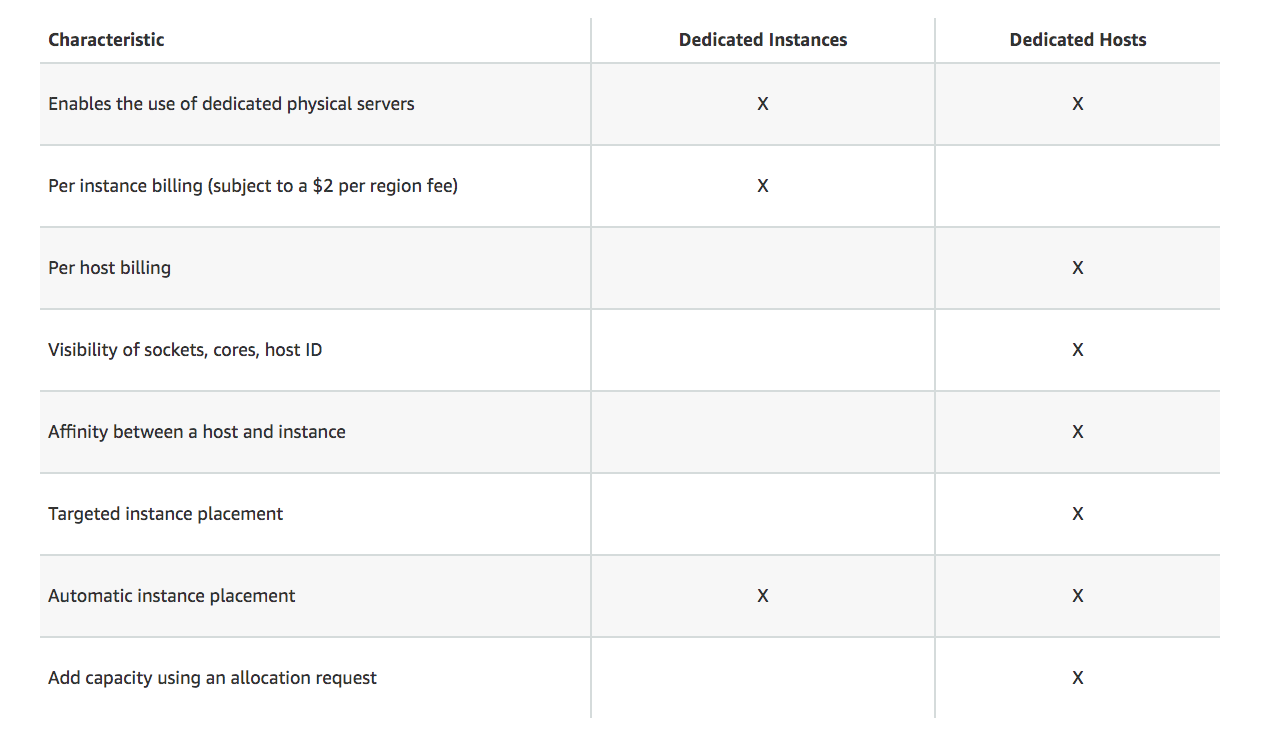 You have the option to launch instances onto a specific Dedicated Host, or you can let Amazon EC2 place the instances automatically. Controlling instance placement allows you to deploy applications to address licensing, corporate compliance, and regulatory requirements.

On-Demand Instances purchasing option is incorrect because this only enables you to pay for compute capacity per hour or per second depending on which instances you run. You cannot use your existing server-bound software licenses with this option.

Dedicated Instances purchasing option is incorrect because although Dedicated instances also run on dedicated hardware, Dedicated Hosts provide further visibility and control by allowing you to place your instances on a specific, physical server.

Reserved Instances purchasing option is incorrect as you would not be able to use your existing server-bound software licenses with this one. You have to use a Dedicated Host instead.

Note: This question was extracted from our AWS Certified Cloud Practitioner Practice Exams.

A company deployed a high-performance computing (HPC) cluster that spans multiple EC2 instances across multiple Availability Zones and processes various wind simulation models. Currently, the Solutions Architect is experiencing a slowdown in their applications and upon further investigation, it was discovered that it was due to latency issues.

Which is the MOST suitable solution that the Solutions Architect should implement to provide low-latency network performance necessary for tightly-coupled node-to-node communication of the HPC cluster?

When you launch a new EC2 instance, the EC2 service attempts to place the instance in such a way that all of your instances are spread out across underlying hardware to minimize correlated failures. You can use placement groups to influence the placement of a group of interdependent instances to meet the needs of your workload. Depending on the type of workload, you can create a placement group using one of the following placement strategies:

Cluster – packs instances close together inside an Availability Zone. This strategy enables workloads to achieve the low-latency network performance necessary for tightly-coupled node-to-node communication that is typical of HPC applications.

Cluster placement groups are recommended for applications that benefit from low network latency, high network throughput, or both. They are also recommended when the majority of the network traffic is between the instances in the group. To provide the lowest latency and the highest packet-per-second network performance for your placement group, choose an instance type that supports enhanced networking. Hence, the correct answer is: Set up a cluster placement group within a single Availability Zone in the same AWS Region.

The option that says: Set up AWS Direct Connect connections across multiple Availability Zones for increased bandwidth throughput and more consistent network experience is incorrect because this is primarily used for hybrid architectures. It bypasses the public Internet and establishes a secure, dedicated connection from your on-premises data center into AWS, and not used for having low latency within your AWS network.

The option that says: Use EC2 Dedicated Instances is incorrect because these are EC2 instances that run in a VPC on hardware that is dedicated to a single customer and are physically isolated at the host hardware level from instances that belong to other AWS accounts. It is not used for reducing latency.

Pass your AWS and Azure Certifications with the Tutorials Dojo Portal