My team and I took the recently released AWS Certified Solutions Architect – Associate SAA-C03 exam version recently. The SAA-C03 test replaced the old SAA-C02 exam version last August. If you can compare the official exam guide of the previous SAA-C02 version with the latest one (SAA-C03), you may notice that the exam domains are almost exactly the same but with quite different domain percentages. 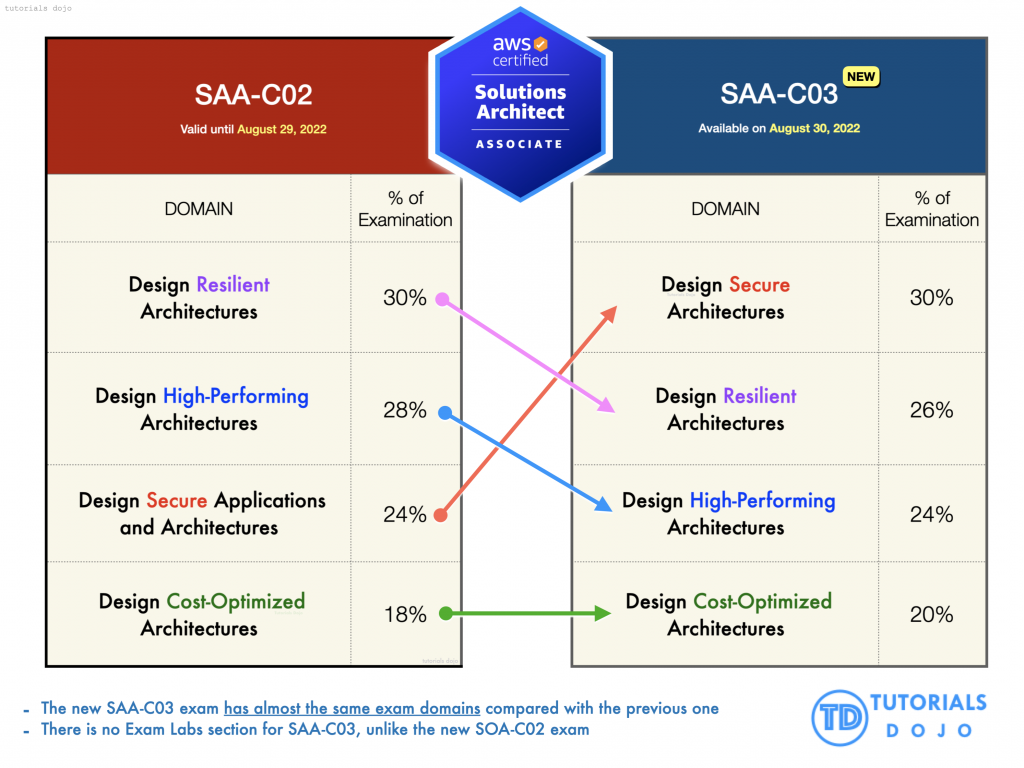 I’ve seen several of my fellow AWS instructors misconstrue this as rather “small” and insignificant change. Some even claimed that there’s almost nothing has changed, and thus, they’re claiming that their outdated reviewers are still valid with the new AWS Certified Solutions Architect – Associate exam.

Don’t forget that there was a 6% increase in the “Design Secure Architectures” exam domain and another 2% in the “Design Cost-Optimized Architecture” domain. There’s around 8% of new content to cover, plus a brand new set of AWS services that was included. In addition, there were a lot of brand new features that were introduced in the existing AWS services. Amazon S3 is an old service which was released on November 2004, yet this storage service is still getting an enormous amount of updates each and every year. The S3 Glacier Flexible Retrieval and the S3 Glacier Instant Retrieval are the new storage classes that were released quite recently and have many other features.

Let’s shed light on this issue by taking a closer look at the actual SAA-C03 exam content and the way AWS scores your exam.

Whenever you take an AWS Certification exam, the system will pull different items on its Question Bank. This makes each and every AWS exam unique. Therefore, it does NOT mean that if you see a question about “Amazon Detective” in your SAA-C03 exam, the other person who also took the exam also got Amazon Detective or the group of services and topics that you had encountered. Before we dive deeper into this idea, we should first define what a “question bank” is and how it relates to the scaled scoring model of the AWS Certification exams.

Basically, a scaled scoring model is commonly used when there are multiple sets of questions for exactly the same exam. These exam “sets” are often referred to as “forms” in some teacher’s handbooks.  A candidate may test on different sets when completing their AWS Certification exams. The overall difficulty of the scenario-based questions may vary slightly, so AWS uses a scaled scoring model to provide comparability in reporting across all sets. Using the same scoring model represents the same level of knowledge on which the candidate is tested.

Let’s consider it this way: There are different sets of tests that a candidate might have when they sit on their exam day. For example, Set B of the SAA-C03 exam has more difficult questions than its Set A counterpart. The person taking Set B needs to answer less number of scenario-based questions correctly to pass the certification. Since Set B is harder, it would have been unfair to other test-takers who encountered those difficult questions unless the raw passing score was properly adjusted: 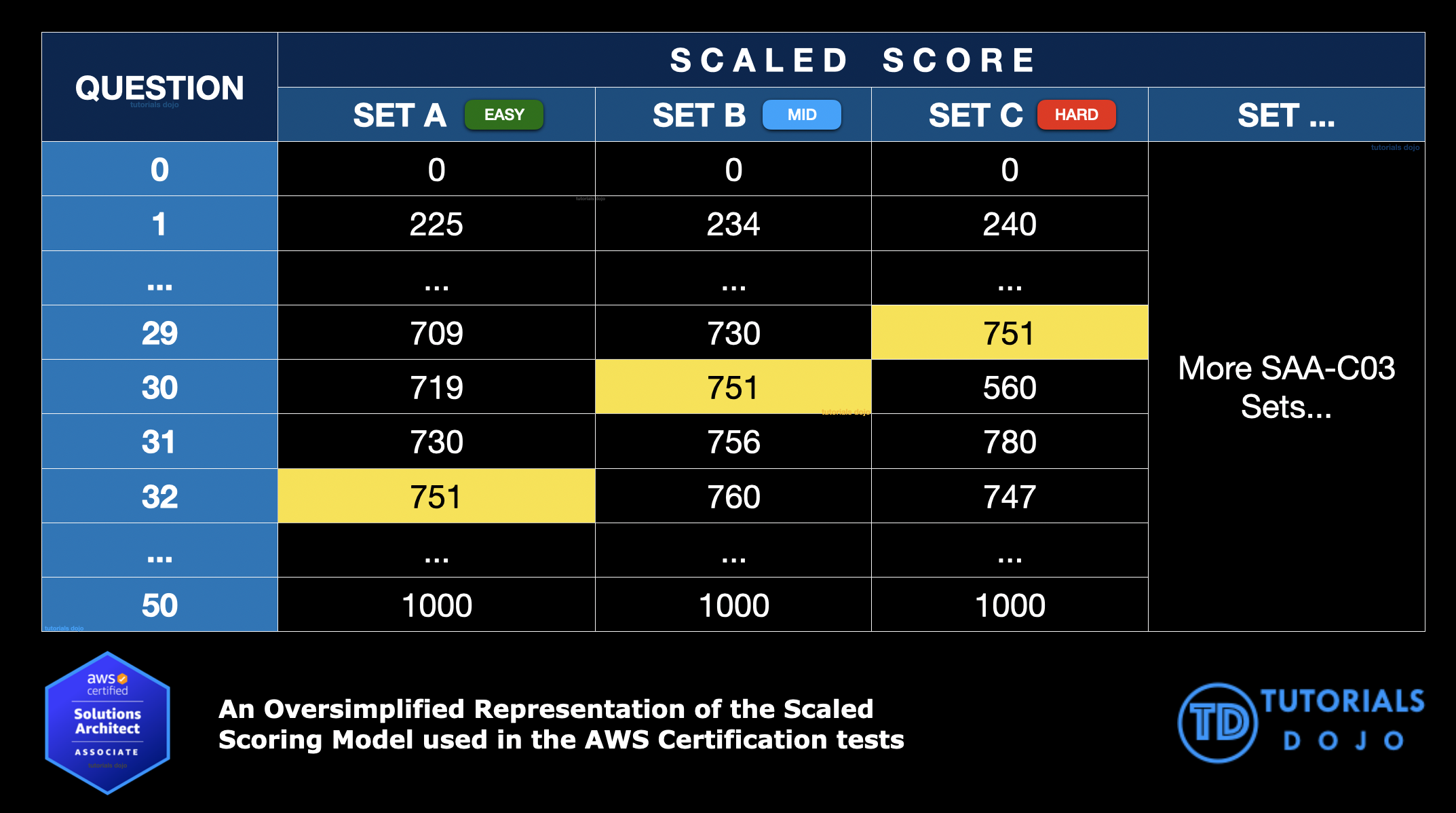 Take note as well that there are 15 items in the SAA-C03 test which are considered as “Unscored Content”. This piece of information can be found in the official AWS Certified Solutions Architect – Associate exam guide. The 15 unscored questions do not affect your score and are mainly used by AWS to collect information about candidate performance to evaluate their scenario-based questions for future use as scored questions. That’s the reason why you only see 50 questions in the table above, with a score of 1000 on all columns. These unscored questions are not specified on the exam, which adds to the mystery of the AWS Scaled Scoring Model.

These different sets are the ones that comprise the entire AWS Certified Solutions – Architect SAA-C03 exam question bank.

Isn’t SAA-C03 a “small” Upgrade to the SAA Previous Version?

There are a lot of articles, YouTube videos, and Linkedin posts saying that the newly launched SAA-C03 AWS Certified Solutions Architect exam is “easy” or has little to no change from its previous SAA-C02 version.

Other AWS Training providers will take the 65-item SAA exam just ONCE and then form some conclusion about this exam based on that one single exam attempt. People keep forgetting that every AWS certification test has a corresponding Question Bank that contains MORE THAN 65 items, so forming a conclusion based on one attempt is highly inaccurate and downright wrong.

Therefore, a single exam take is definitely NOT enough to say that you have seen all relevant SAA-C03 content – far less actually unless you repeatedly take the exam again and again and again. Knowing this piece of information is quite important in choosing your SAA-C03 exam reviewer and in the way you study for the exam. 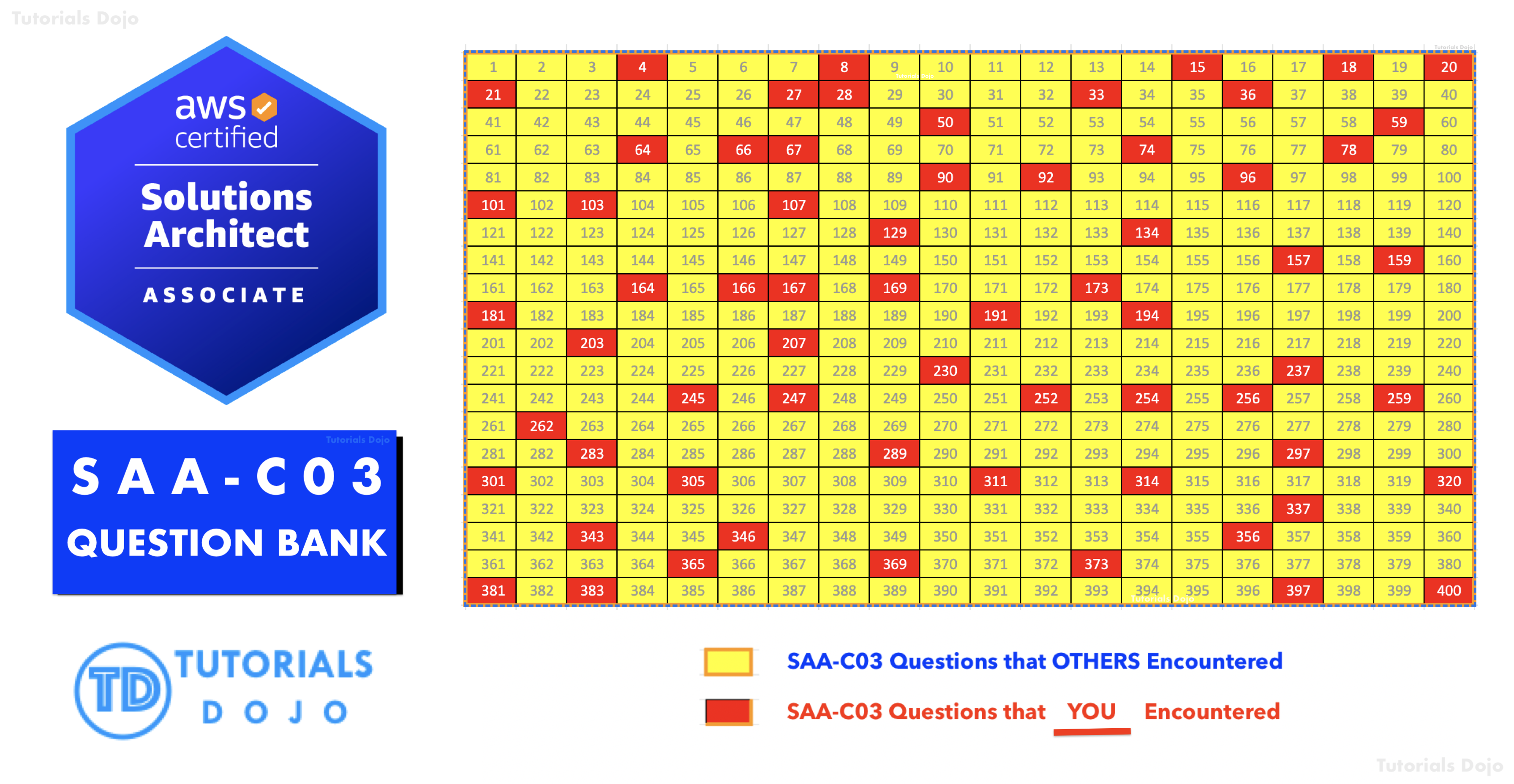 I even saw an AWS Instructor in Udemy claiming that the AWS Certified Solutions Architect – Associate course was “fully updated” to the new SAA-C03 version EVEN before August 2022. Some even claim that their content was updated despite not having taken the actual SAA-C03 exam yet! That seems dodgy if you asked me since only the AWS team knows the new exam content.

I do understand that the official Exam Guide has a list of the relevant AWS services that are covered in the actual SAA-C03 exam, which can be found in the Appendix section. If the course contains all of the related AWS services enumerated in the Exam Guide, we can say that their reviewers are somewhat “updated” for the new exam version. But take note that simply having a lesson about a particular AWS Service doesn’t mean it is totally related to the SAA-C03 exam.

Let me give you an example: an instructor added a new lesson on his/her SAA video course about Amazon Comprehend. In the new video, he discussed the basics of this service as well as its use cases. However, did he/she cover all of the features and advanced use cases for this AWS service? Are the Text analysis APIs, Ontology Linking APIs, Amazon Comprehend Medical, and its other components that may be included in the official AWS Certified Solutions Architect – Associate exam?

This is why you have to take every marketing claim with a grain of salt. If an instructor tells you that his/her course is updated based on a single exam attempt that he/she made, then that claim is not entirely true, in my opinion, based on the facts I shared above. All AWS reviewers in the market must be continuously updated in order to properly cover all the new services, features, and topics of its new iteration.

Can I just use SAA-C03 exam dumps to pass?

The new AWS Certified Solutions Architect – Associate SAA-C03 exam is composed of 65 questions only; however, the scenario-based items that you’ll get will wildly vary from the set that the other test-takers will receive. Notably, this is also one of the reasons why using illegally-acquired exam dumps for this AWS test is highly ineffective – not to mention how unethical it is. The variety of the questions you’ll get will be quite different from everyone else. You also don’t know if the provided answer is correct or not.

The AWS Certification and Training team is always updating the exam content, so the exam dump that you’ve been using could be already outdated from the get-go. Let me give you a very practical example:  Spot Blocks, which are basically Spot Instances with a defined duration, are no longer available to new customers since July 1, 2021. This feature is only available to customers that have previously used this feature and will continue to support Spot Blocks until December 31, 2022. Here’s a link to Spot Blocks on the AWS Documentation site, but since it will soon be decommissioned, that link may also be non-existent by the end of this year.

Will the new SAA-C03 include Spot Blocks and other soon-to-be decommissioned features/services in their exam content? I personally don’t know, that’s why you really have to study well for your exam and NOT use or rely on any exam dumps. It’ll just mess up your mind.

For me, the best way to study for the AWS Certified Solutions Architect – Associate exam is to focus on the Task Statements that are enumerated in the official Exam Guide, as well as the listed AWS services in the Appendix section. Don’t just study the basics of a given AWS service – learn its various features and types, too, including the valid use cases where it is used. Spend time doing your hands-on labs and read all success stories from medium blogs, Linkedin, or in the r/AWSCertifications reddit sub.

There are a lot of questions in the SAA-C03 exam that presents two seemingly valid options, so you absolutely must know the patterns and anti-patterns for each AWS service. This is the observation we’ve made based on what my team and I encountered in the actual test.

Wishing you all the best in your upcoming exam! You can make it!